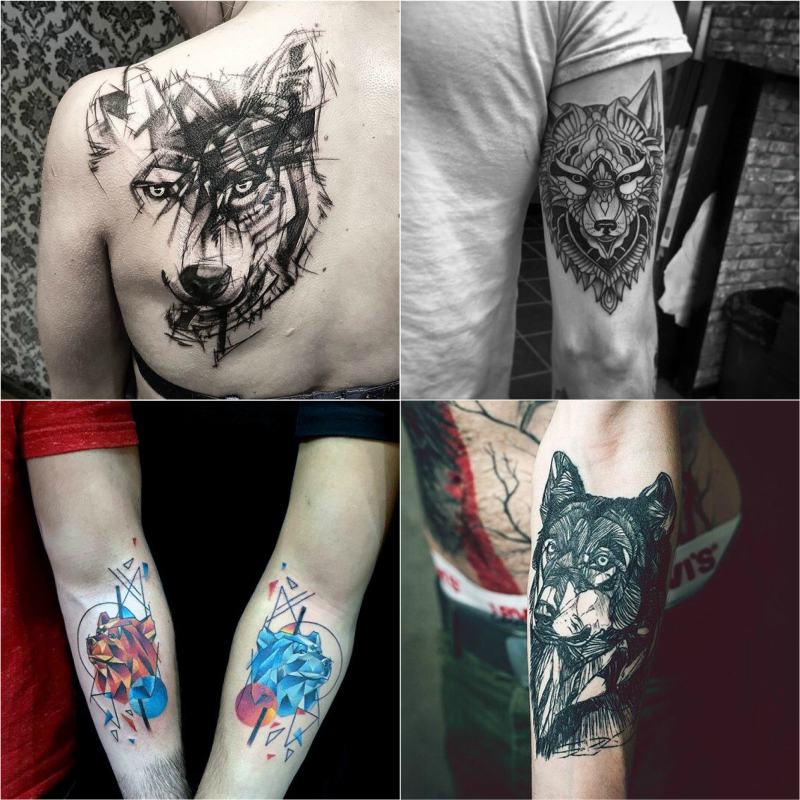 Wolf tattoo belongs to the mainstream items. Wolf holds a special place in mythology and literature. Most of the time, wolfs are seen as evil characters, but they are very much family-oriented. They hunt in a pack and stay united. Thus, they survived through the years. Wolf tattoo is a symbol of strength, love, devotion, and loyalty. They are very popular among men.

If we look into history, most prominent evidence can be found in Roman culture. They believe that Romulus and Remus, she-wolf and her brother, was the founder of the Roman Empire. Wolf was the sacred animal of god for them. According to Norse mythology, wolfs are responsible for cosmology. On the other hand, in Greece, people imagine the wolf as a communicator of God. Wolf is a guide and associate for Irish people. Similarly, as per Native American culture, a wolf is a figure of power, strength, wisdom, family, and spiritual guide.

Hence, the wolf is a dynamic and powerful character and Wolf tattoo carries such impactful meanings. Every species of wolf and supporting characters states some unique meanings. We have tried to sum up some individual designs and their meanings of wolf tattoo here for you so that you come out with a vivid idea about it. 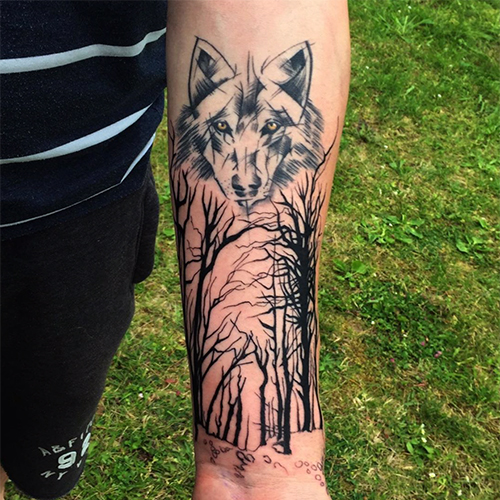 This is a classic exemplar of wolf tattoo in the gothic style. Wolfs resemble dark, black, or night. Gothic styles are also associated with black. So both gel together and create a gothic wolf tattoo. It is often collaborating with the tree, forest, nightlife, or dark landscapes. This is an elaborate rendition with lots of details. The brush strokes make the wolf wilder. The tattoo of dead trees creates an altogether perfect scary wild scene. People, who love nightlife or wildlife, can get inked with this type of tattoo as a symbol of protection. 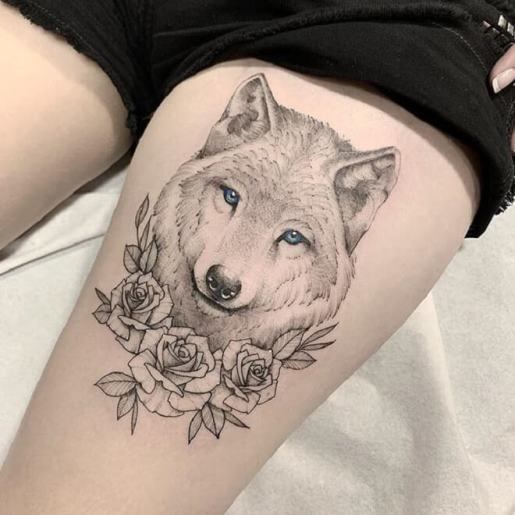 As wolf is a symbol of love, with love it depicts romance. Wolfs are considered monogamous. So people, who want to show love and pure devotion towards their partner, can flaunt this tattoo. This one is an arctic wolf with a blue eye. Arctic wolfs are almost white, but no adult wolf has a blue eye. Then blue eye means tattoo owner is unique by nature and wants to show off some extraordinary design, or special love for loved ones. This illustration on the thigh looks realistic, sober, and classy. 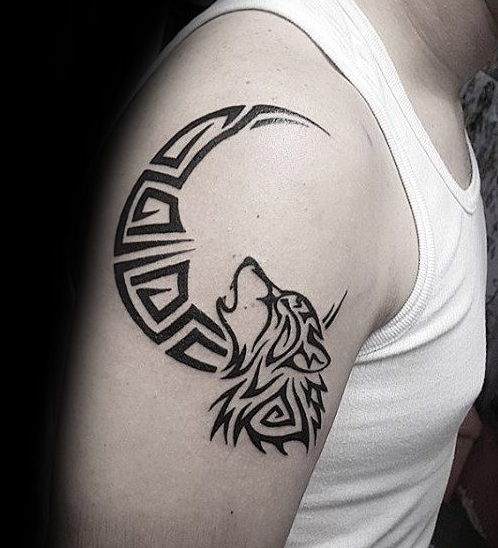 A tribal form of art is a very old practice. The main feature of tribal art is multiple bold thick lines on black. The end parts of the line may have a tapered sharp edge. The tribal tattoo may contain lots of other elements as per desire. This makes the tribal form unique and complex. Tribal tattoos are so authentic in the formation that people get inked out of their love for their culture. A medium-size prominent tattoo is good to fit on your arm, shoulder, back, neck or backside of palm. It may cost you a little high. 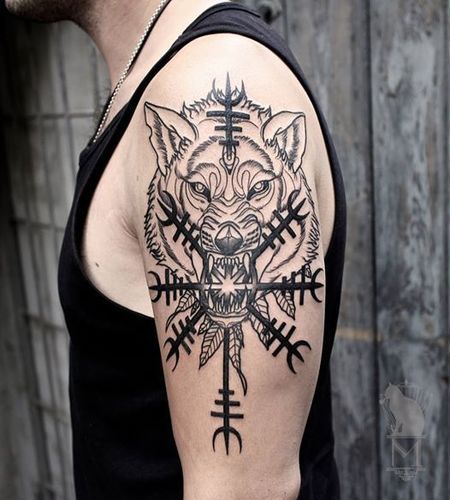 The tattoo is showing an extremely brutal set up of a wolf. Wolf snarls when they are angry or destructive mood. It depicts the ferociousness. A person having much strength to fulfill a resolution, or simply possess a will power, can get inked this type of tattoo. This one is really big and furnished with lots of weapons. It will fit on the forearm, leg, or back. An elaborate tattoo will make you pay high. A forearm tattoo is good as it can be cover up when you need it. Tattoos with congested composition need extra care. 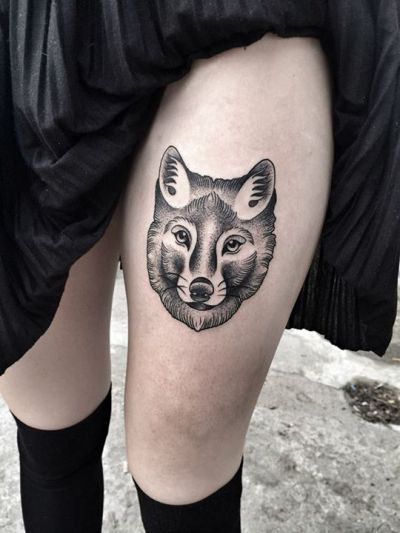 A beautiful portrait of a black wolf. They can be considered as luck and at the same time as a symbol of fear. The black wolf is a symbol of hunting. In the movie or novel, the black wolf often comes as a fear factor in the plot. They hunt in a pack which indicates unity. People believe in the fact that the black wolf is also a spirit wolf. They appear as a messenger or warning factor for the transformation of life. It may assure you to go ahead without fear. 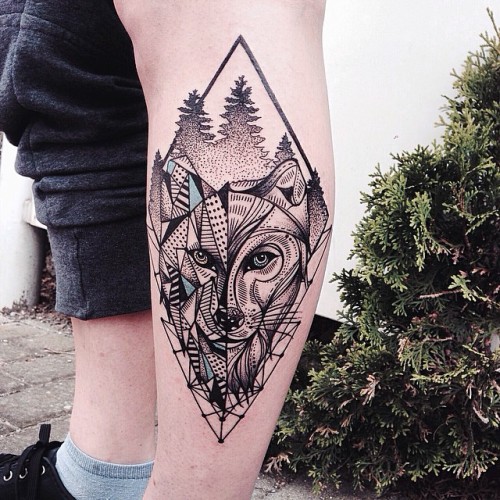 Geometric tattoos are very basic and ancient forms. The geometric wolf tattoo is a configuration of a wolf with some natural graphical shapes. Tattoo expertise strategically places regular shapes to illustrate an abstract form. Here the main feature is symmetry. A geometrical wolf is a symbol of spirituality, sacredness. The tattoo creates a large shape of rhombus which means protection. The intricate works, a tinge of color, dots works makes tattoo so rich in value. It reflects the intellectual personality of the tattoo wearer. Leg tattoo needs some extra maintenance due to sun exposure. 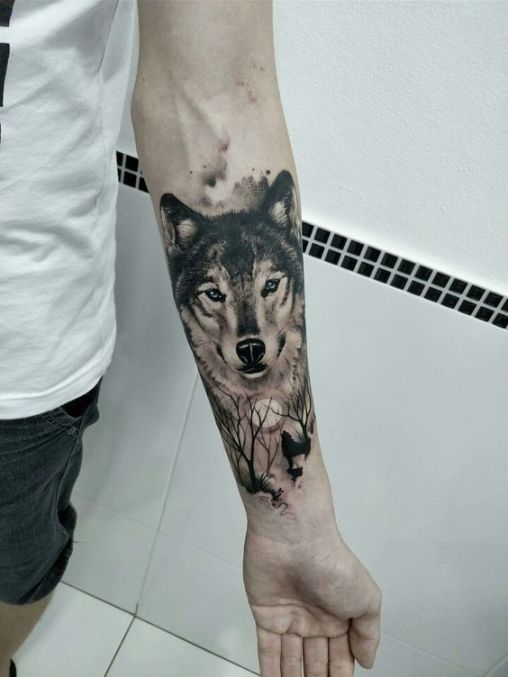 One of the most common and famous wolf tattoo designs.  Wolf often appears as a bad or mysterious signal when it associated with the full moon. In a horror movie, an unfortunate incident is suspected when wolfs come to the forest with a full moon. People who love mystery can show off this tattoo on hand, or middle back. A dead tree is a symbol of lost love. The tattoo gives a sense of insecurity. The realistic and elaborate design of the wolf is costly, so before getting ink to try to know in detail. A dark and large tattoo will make you pay extra care for them. 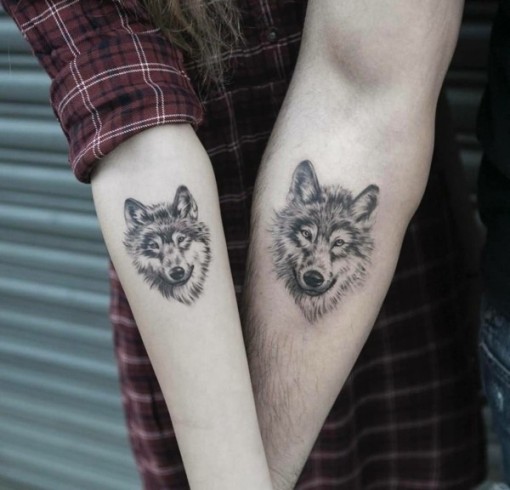 The same pair of tattoo worn by both the partners is completely couple-goal. Here, the couple has worn the same grey wolf portrait in different sizes. This realistic grey wolf is a symbol of love, romance, and family. They stay together, hunt together, and convey faithfulness. Wearing a matching tattoo couple wants to state their unconditional love for each other. It connects their souls and completes each other. Thus, this medium size tattoo is loved by both men and women. Choosing a matching design is as important as your partner. 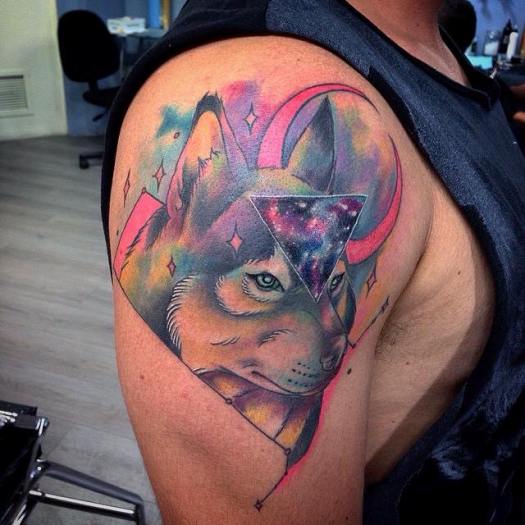 Artists rendered a beautiful modern colorful wolf tattoo following his/ her imagination. A triangle on his head is a symbol of the natural element. Sparkling stars on the tattoo enhance beauty. Notice the neckline of the wolf which connects the stars. Hence, the total tattoo represents the whole universe with the moon at the backdrop. This tattoo is suitable for a shoulder which is good for maintenance. You can cover the tattoo when you need or flaunt the tattoo.  A multicolor tattoo makes you pay high. You can layer up this tattoo anytime with matching motifs or colors. 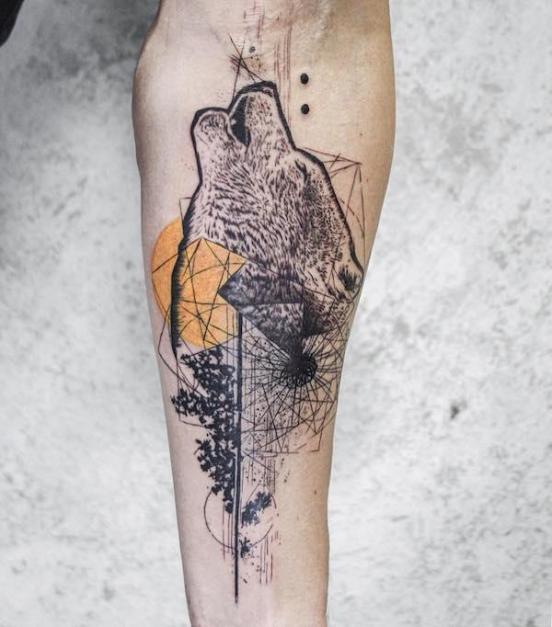 This is a specimen of a multi-layered, complicated howling wolf tattoo. Howling tattoo often comes with the moon in the background. It is an indication of any unnatural or dangerous or unfortunate incident. Wolf is a very faithful animal and fond of their family. They howl to communicate with their family. A howling tattoo is associated with power, strength, and wildness. Some also believe, wolfs connect with spirit. The tattoo exhibits an exceptional depiction of the artist’s imagination. This tattoo looks good on your inner arm. Complex composition and application of color make tattoo expensive.

Now, you have some basic design ideas with their explanation about your wolf tattoo, and organize your tattoo to express yourself. 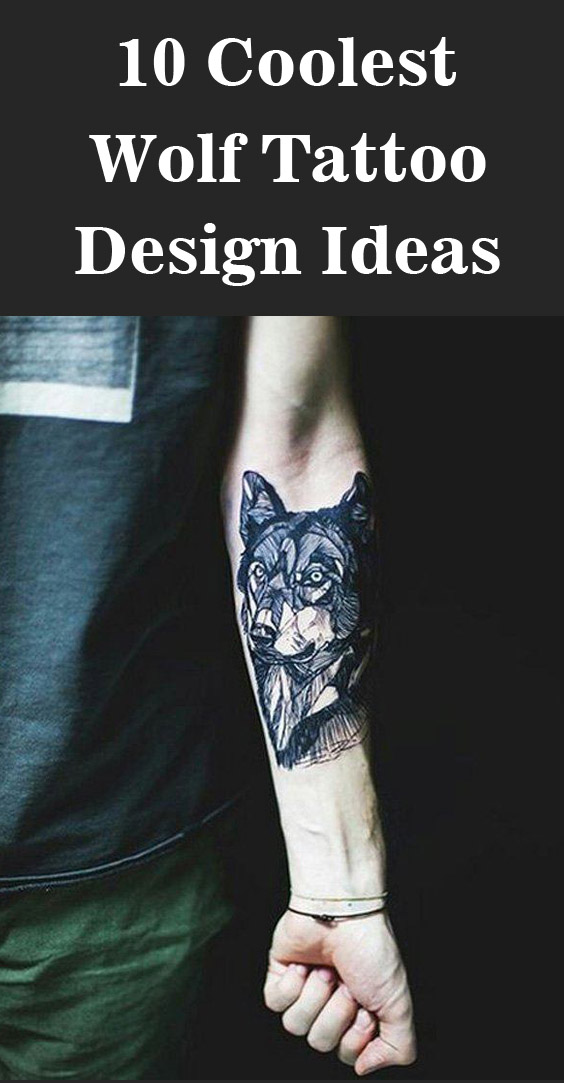 Always remember, that tattoo is a life-time affair. So, get familiar with the tattoo concept of tattoo which you want to get inked. And most importantly, fall in love with your tattoo and flaunt it.