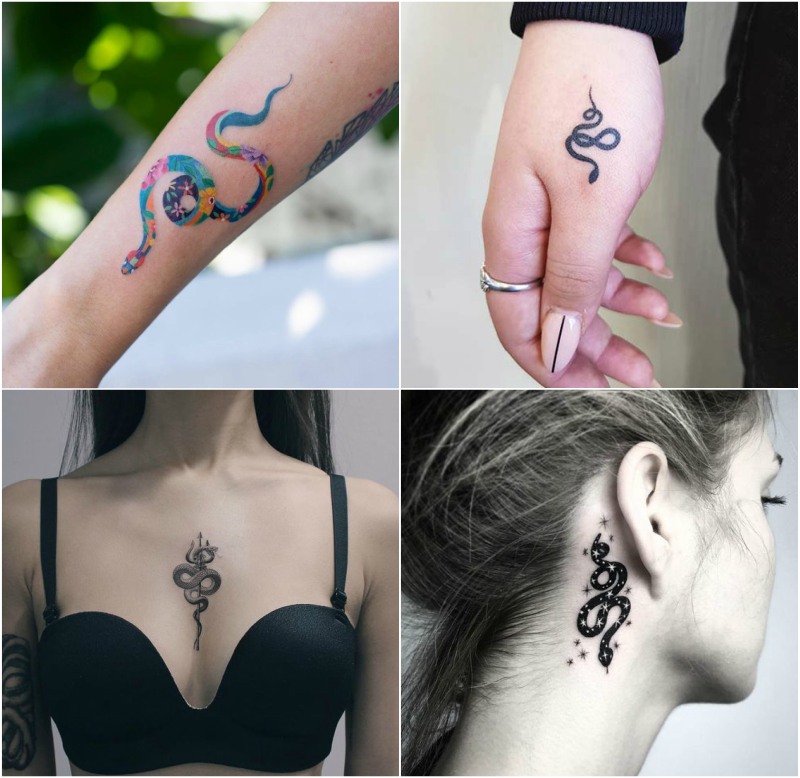 Snake or serpent holds an important role in our history, mythology, culture, and beliefs. As written in the Bible, the serpent insisted Eve to have the apple and since then sin began as a result. So snake has been seen as the symbol of lust, temptation, and kind of evil. But the snake also represents the force of nature, life, and fertility. It’s believed that as they shade skins they are also the symbol of growth, transformation, and healing. For native people, snakes consider as sacred and represent masculinity and femininity both at the same time. So getting a snake tattoo has both positive and negative impacts. It depends on the person, how he is connecting with the snake Tattoo inked into the skin. It symbolizes grace, purity, knowledge, the cycle of life, courage, etc. On the other hand, it also depicts the evil, negativity, hell, demonic side of the tattoo and the bearer at the same time.

As the snake is held as evil but also has medicinal properties, so the tattoo design has similar aspects. It is up to the bearer which is the meaning of the tattoo he or she wants to represent. The first one has to be very clear, whether it’s your beliefs or fashion statement, choose your tattoo design wisely.

Let’s take a look at the following tattoos and what they represent to you. 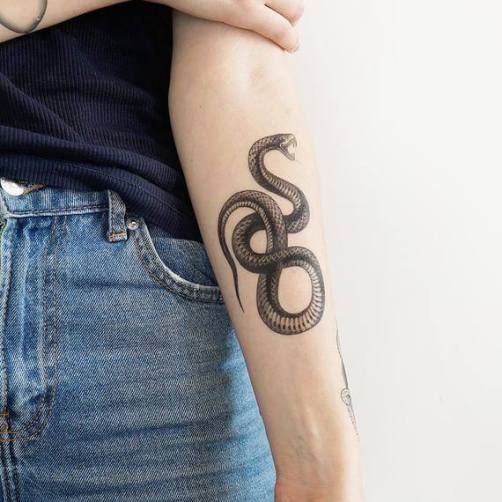 Blackwork snake tattoos are very unique and stylish designs. It is bold and very striking. It resembles the idea of rebirth as the design makes the snake look more lively. It is mostly done on the forearm and demands patience. It has intricate designs and doesn’t need any other color than black. But be careful while doing the tattoo as some major veins are going underneath the skin and may hurt you a little. It is very interesting to notice that, this design is in the tattoo collectors bucket list. 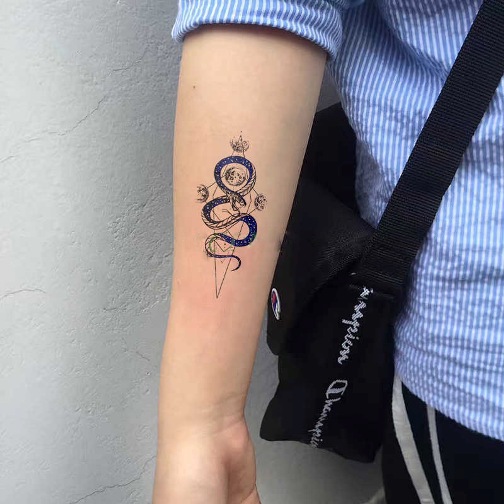 This snake tattoo has a blue and black combination with dark and faded lines. It has some geometric patterns and celestial figures also. It is a subtle masculine tattoo that can be inked on your forearm. The geometrical pattern represents balance, stability, and mystery also. And the snake tattoo shows strength, transformation, and new lease of life. Whereas, celestial bodies like stars and planets, represent the connection between the spiritual and physical world. So, this unique design works as a bridge between belief, spirituality, and potential experience in practical life. 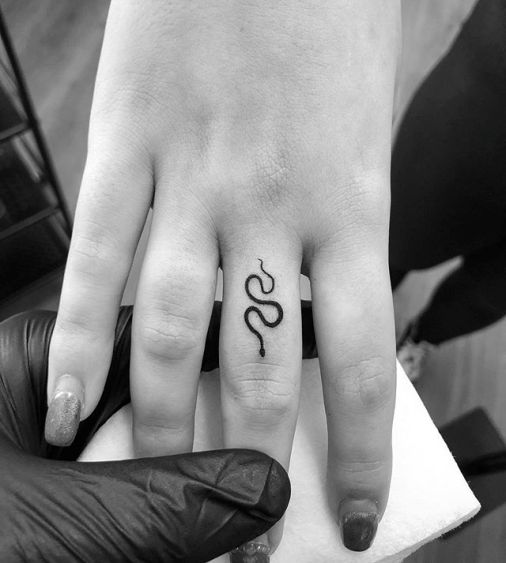 A beautiful sleek black snake tattoo on the ring finger depicts a lot of emotional waves. It means a token of appreciation and love for your beloved. And as we already know, snake tattoo design elaborates on the idea of temptation, lust, and fertility along with secrecy & mystery. This amazing design can be a token of love and sealing the bond between two souls. Some people opt for a color variation also, like either red or black. As it is tiny and doesn’t require much detailed work, may not cost you much.

4. An Entangled Snake Tattoo on Neck 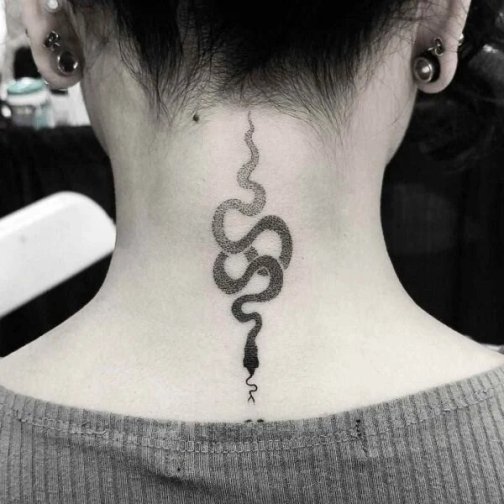 A beautiful entangled snake tattoo on your neck can be a major fashion statement. It has modernity and mythological touch at the same time. It reveals the secretiveness and the idea of protection, balance & authority. It’s forming an interesting loop pattern also. Its mouth is pointing towards the spinal cord and the tail towards the brain. It seems it’s striking a balance and coordination. But as it is done on the neck, it can hurt you a lot and the artist has to be very careful while doing it. 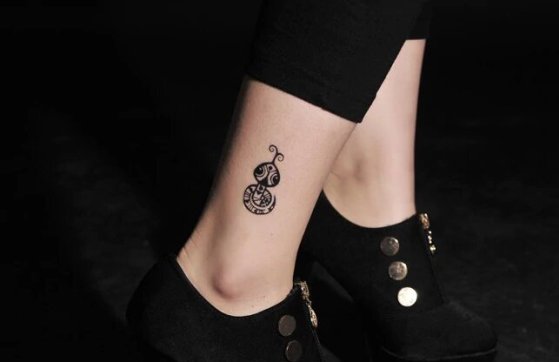 This little snake tattoo design is very feminine, though snake tattoo can be linked by both parties. This tattoo design draws on inspiration from tribal art. The eyes and small yet geometrical shapes make it very interesting. Like a small pack of the dynamo with immense possibilities and waiting to be explored. It is powerful, ready to change, take charge, and build up awareness. Tattoo on the ankle, it may cause pain but won’t cost you a hefty amount that’s for sure. You can wear them with short jeans with ample opportunity to show off. 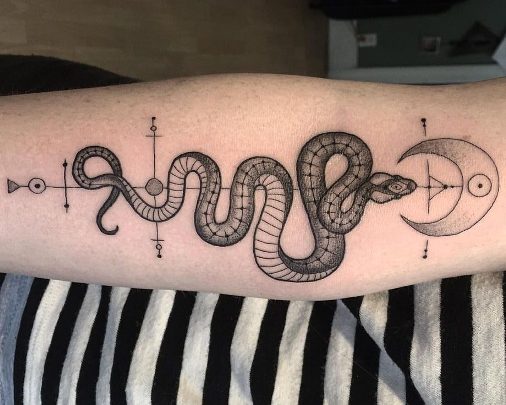 This design is so interesting; one may not take his/her eyes off. It’s kind of enchanted, mystique, and believed to be inspired by gypsy culture. As you see, the snake has detailed work with thin backlines and aligned with some lines which are making a pattern. And at the end the Crescent Moon with a circle in-between. It is a popular belief that, snake and moon are related as both change their phases and every time transform. So a tattoo having both in it is a strong indication of the person’s possible transformation, regeneration, and discovery of one’s self. 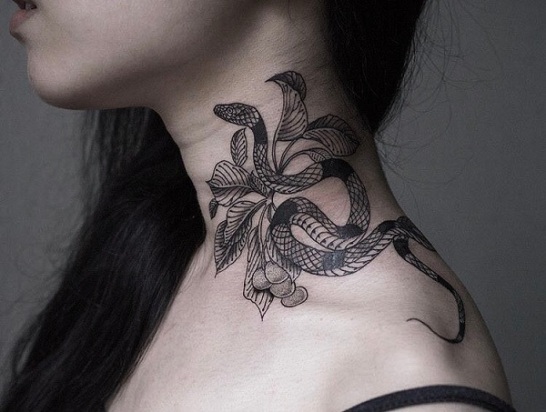 A beautiful design inspired by Japanese tattoo art. The snake and the leaves are so palpable that hardly one can distinguish. As if, the pit viper snake has been camouflaged with the leaves. Both bear the same line pattern and make it visually appealing and at the same time indicate some hidden danger also. Snake tattoo represents the circle of life and power, whereas leaves & fruits depict the love, lust, desire, and life force. So together, they make a deadly combo, and the bearer should be very careful before carrying it. 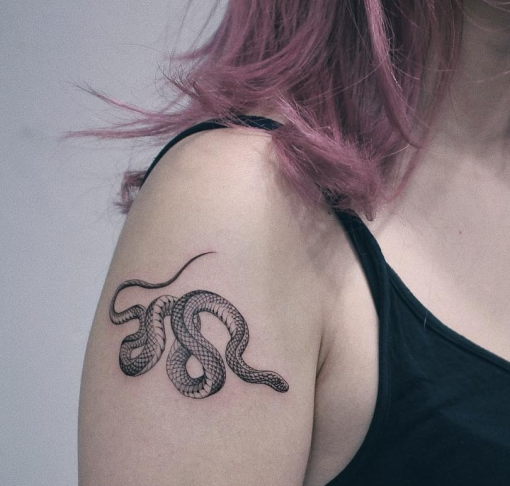 A detailed line work brings this snake tattoo to life. On your upper arm, it shows the power and authority along with a sense of mystery and divination. Opting for color may be your choice but here the black ink does the wonder. Detailed line work, tile, and geometric patterns and interesting loops made the design worth a shot. The simplicity may not put a hole into your pocket and won’t hurt much either. Post-tattoos care is also easy as you can hide it easily whenever needed.

9. A Beautiful Serpent Tattoo on The Backhand 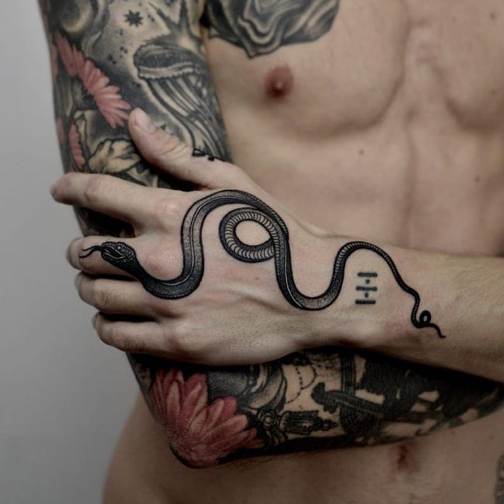 This beautiful sleek black snake design on hand is so powerful and authoritative. The owner should have a sense of conviction and wisdom & patience. It also shows some kind of darkness, revenge, and temptation at the same time. So while choosing this design one must be clear with the meaning that the tattoo is going to convey. The approaching serpentine may not be easy for others to follow, yet it has a charm, hard to resist. It is on the back of your hand, the artist has to be very careful as lots of veins and arteries are there just under the skin. 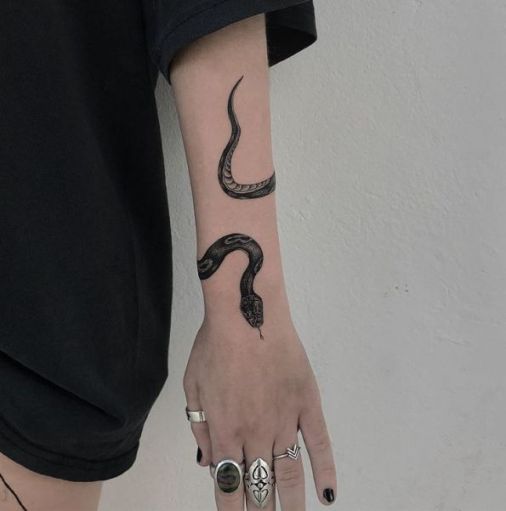 This particular bracelet designs with black ink snake tattoo are so feminine & stylish. The tattoo doesn’t show the full length of the snake as half of it hidden at the back of your hand. Thus making it mysterious and gives a hint of discovery. As the snake is approaching and holding you at the same time, it gives a sense of security, power, grace, and sexuality. One may choose a tattoo out of community belief, tradition, and custom or just for fashion. Be careful as some important arteries are going underneath.

Now, you can have an overall idea of different kinds of snake tattoos with their vivid description. Choose and customize accordingly your personality. Tattoo becomes part of your body, just put it in the right way and flaunt it fearlessly.