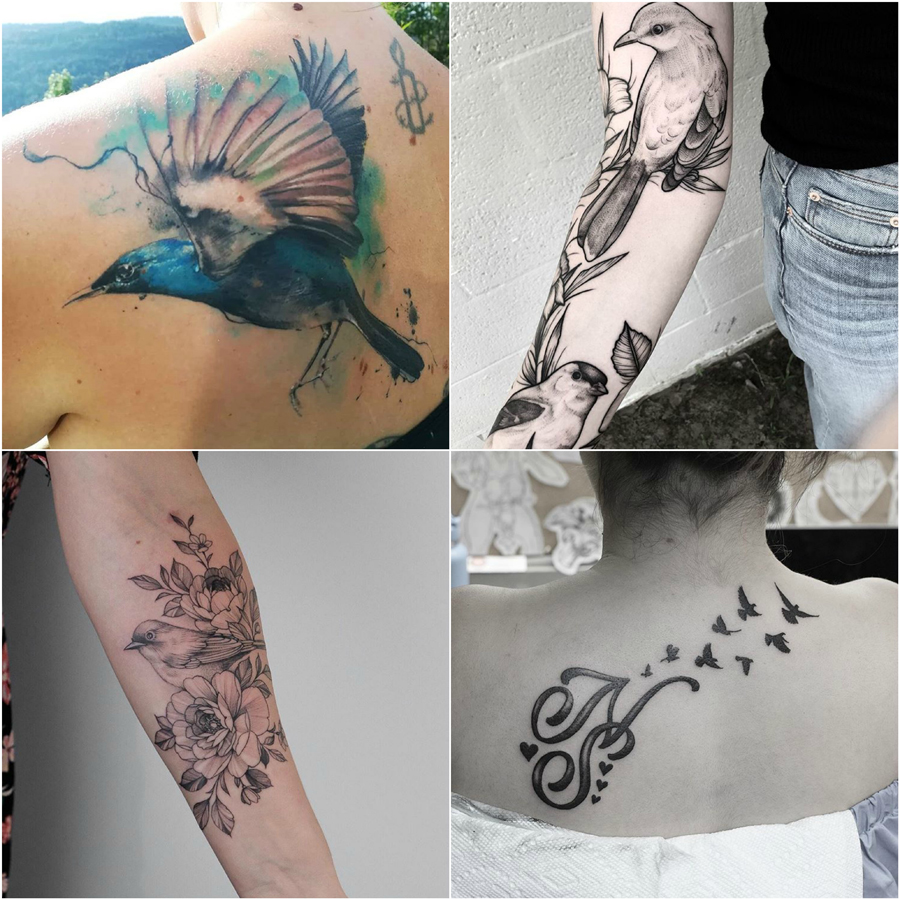 Tattoos on your arms or body parts must be unique and must look grand too. When that beauty signs on you with colours and cuteness, how would that look like? Having some birds with enchanting colours on your arms at your back top is the best idea about the same. A sparrow or a set of birds chirping at each other is not only beautiful to look at but is also perfect to express what you like in your personality.

Here are some of the best paintings like that, which you would surely like to be placed as a tattoo on your different body parts. Enchanted with multiple colours, try out these designs and feel the beauty of tattoos. Each and every design stated below is sophisticatedly designed for your passion. So, check them out and try out any one of them.

#1. A bird particularly in the shape and size of a sparrow on your arms – it’s awesome. The bird is seen clawed on a thin branch having beautiful leaves. The monochromatic bird is detailed minutely. The bird also has a sharp look with a pointed beak. 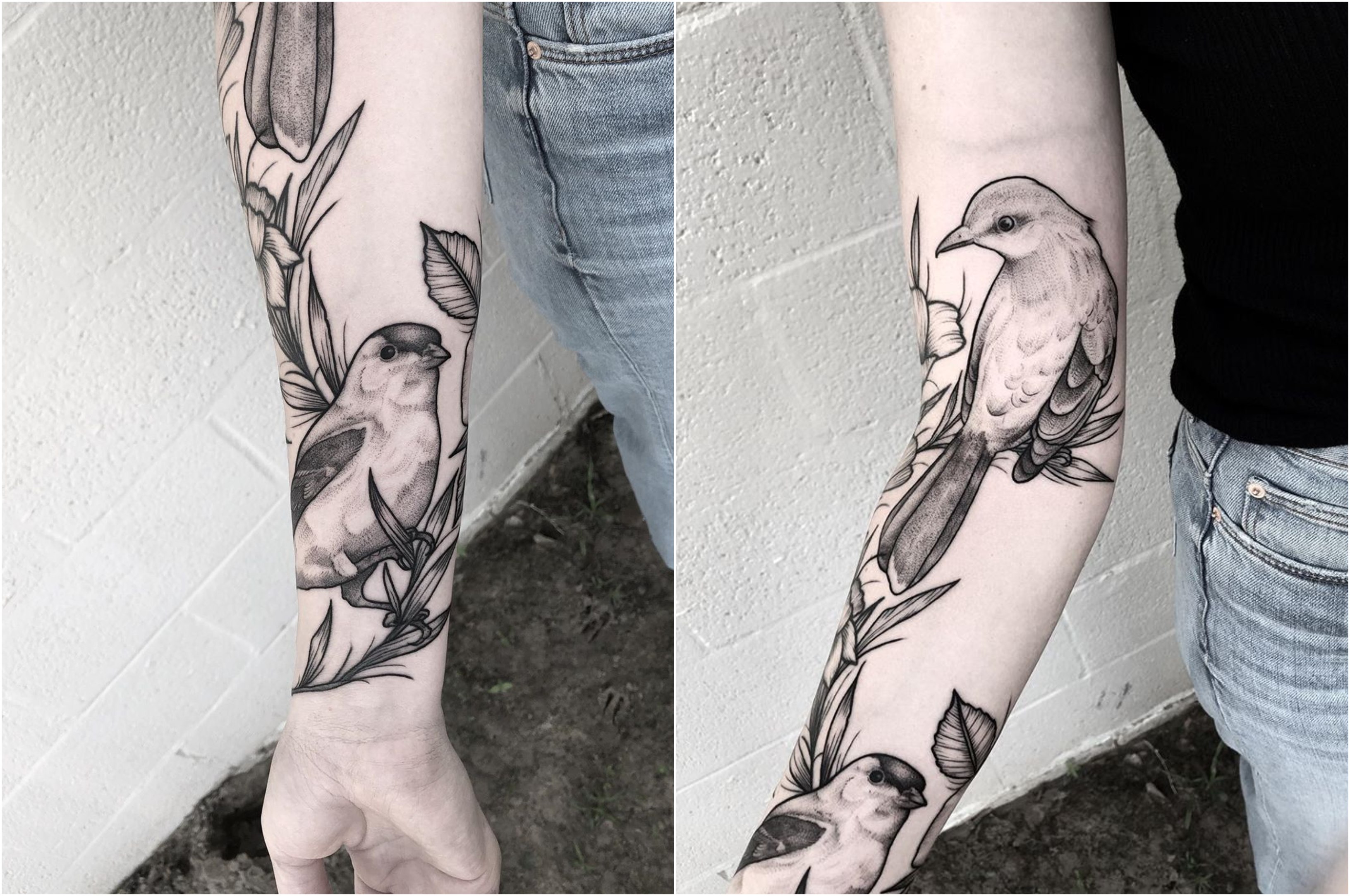 #2. Flying bird- the two sets of bird in witnessed flying spring out all its wings. The wings are detailed in such a way that each shade of the wings adds a versatile tone to the flying bird. 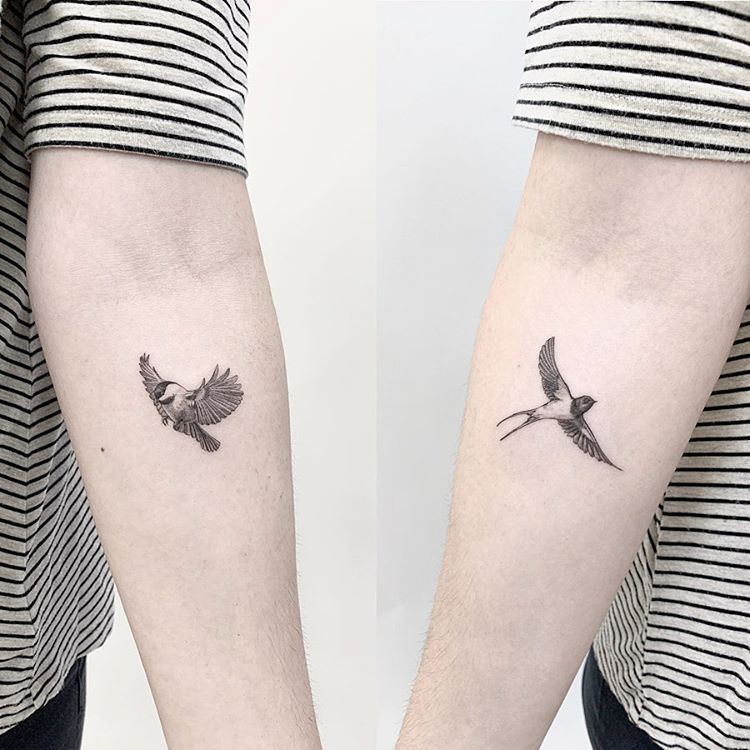 #3. This tattoo is made in an uneven pattern. Colours are seen scattered around the primary object, that is, the bird. The body of the bird is painted in a shade of blue and black. Beside the bird is a candle wrapped in wire.

#4. The trio- the image portrays a trio of a bird flying in their own ways. The image points out the different ways by which a free bird flies in the open blue sky. The birds are depicted flying in a way that conveys the message of friendship. 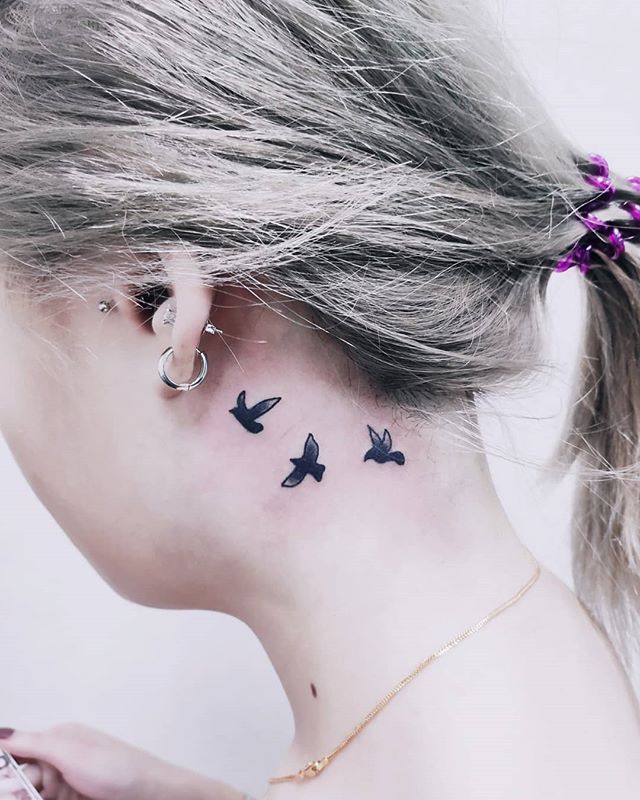 #5. This tattoo contains a bird, a cup of tea. The cup has a tea bag having the alphabet G written on it. Parallel to the tattoo is written ‘Chin-Chin’ vertically. 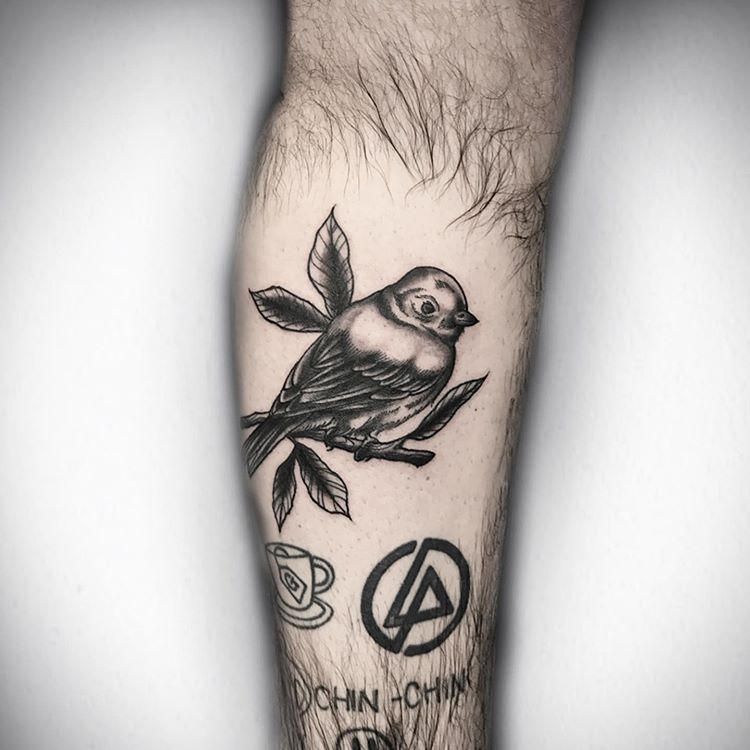 #6. Two birds are facing each other in a way that they are about to produce an image of togetherness. Although the faces are not seen distinctly, the eyes facing downwards produces an effect which suggests a significant bowing down due to age. Both of them are flying with the wings stretched to the fullest. 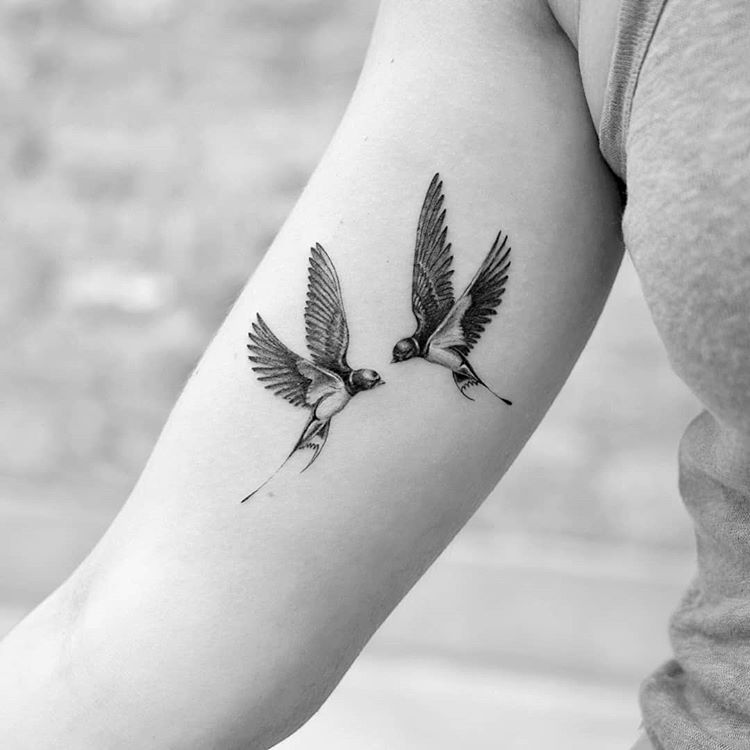 #7. The tattoo itself is attractive in a pretty or endearing way. The salubrious bird wears black and red tulle around its neck. It also has a red charming mole on its cheeks. 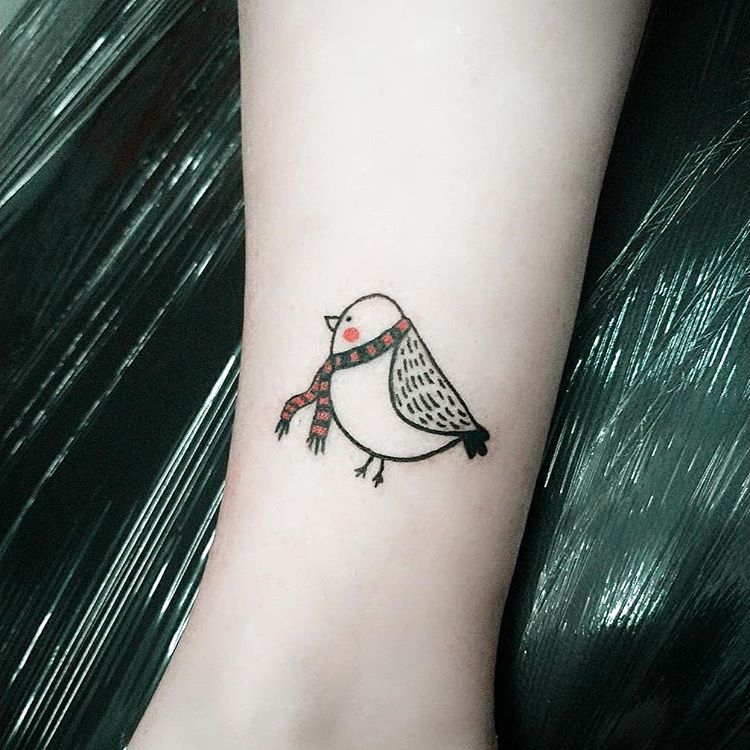 #8. There are eight flying birds facing different directions. The image depicts the different stages of a bird’s flight in an upward direction. Thus the birds are drawn from the smallest to the highest. 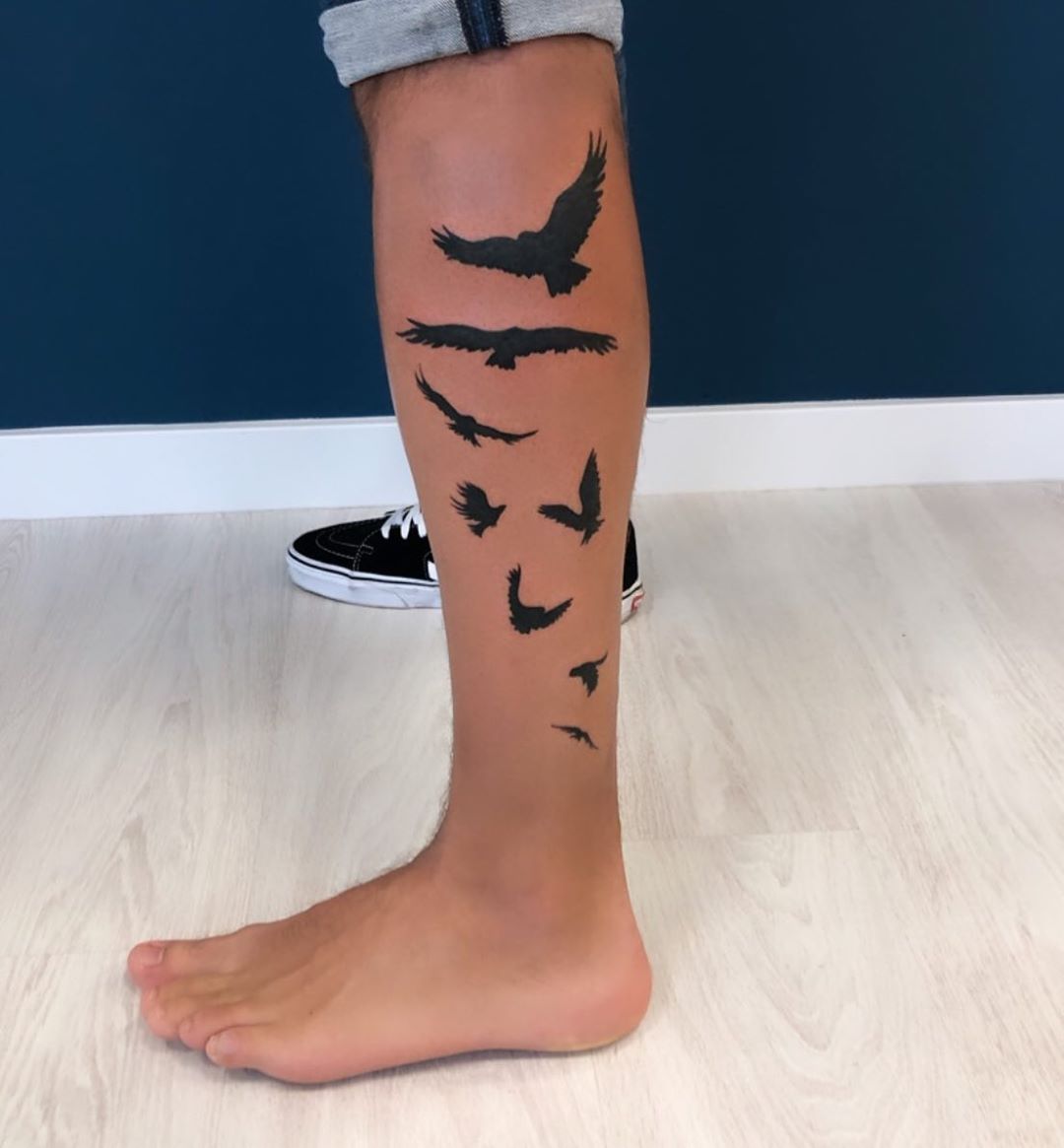 #9. A bird painted in shades of blue and white. The bird is sitting on a single branch. From the branch outgrows two leaves both of which are painted in turquoise blue. Two adjoining semi circles are drawn hanging from the lower side of the branch. At the end of one semicircle a cross symbol is drawn beside which a drop of water is seen. 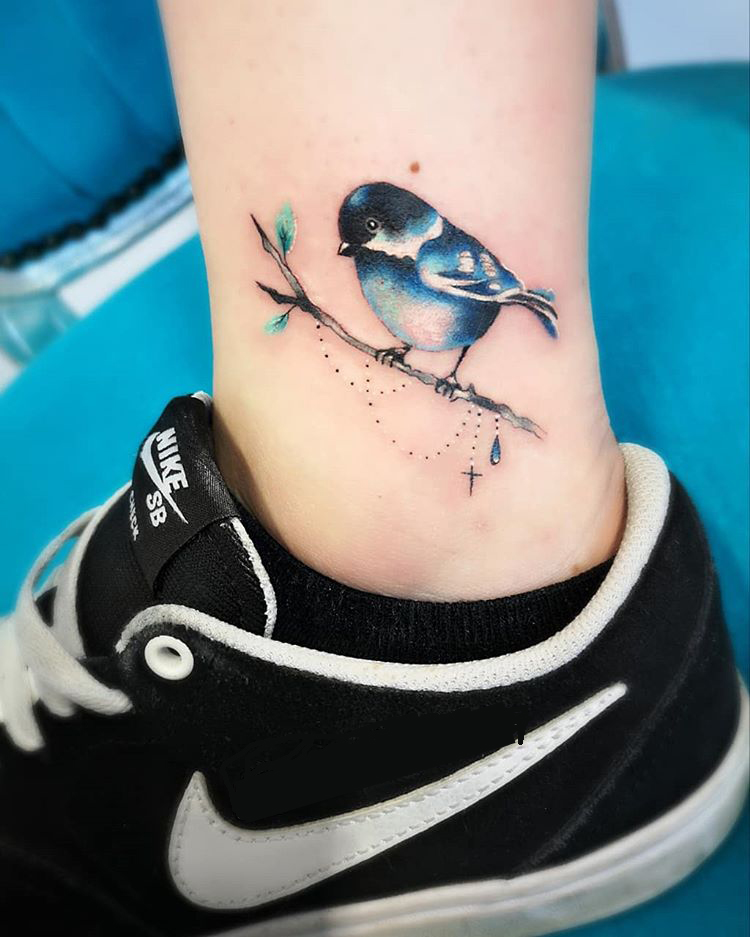 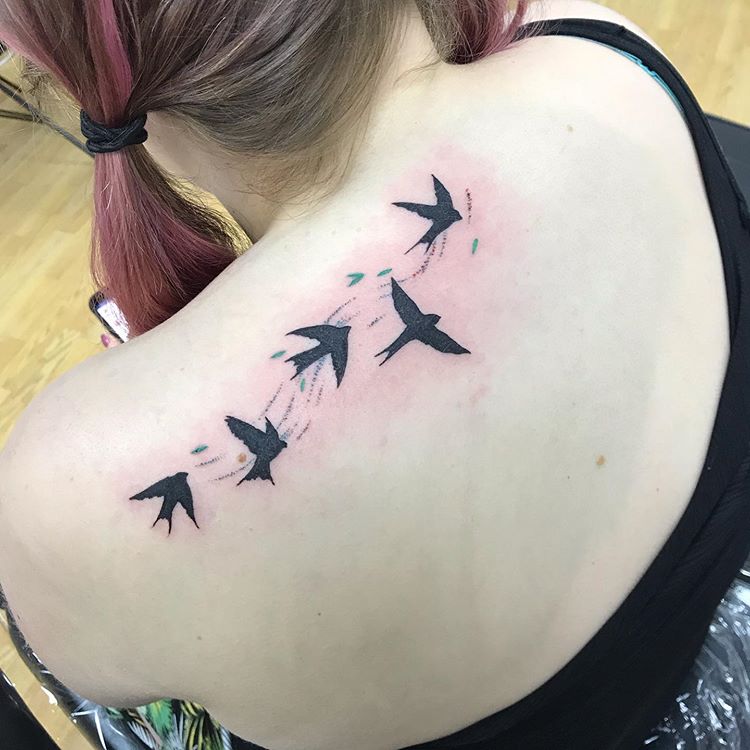 #11. This is an image of a bird with a narrow neck and red beak. The claws are painted in red as well. The wings are drawn with a comparatively bold shade of black as compared to the rest of the body. 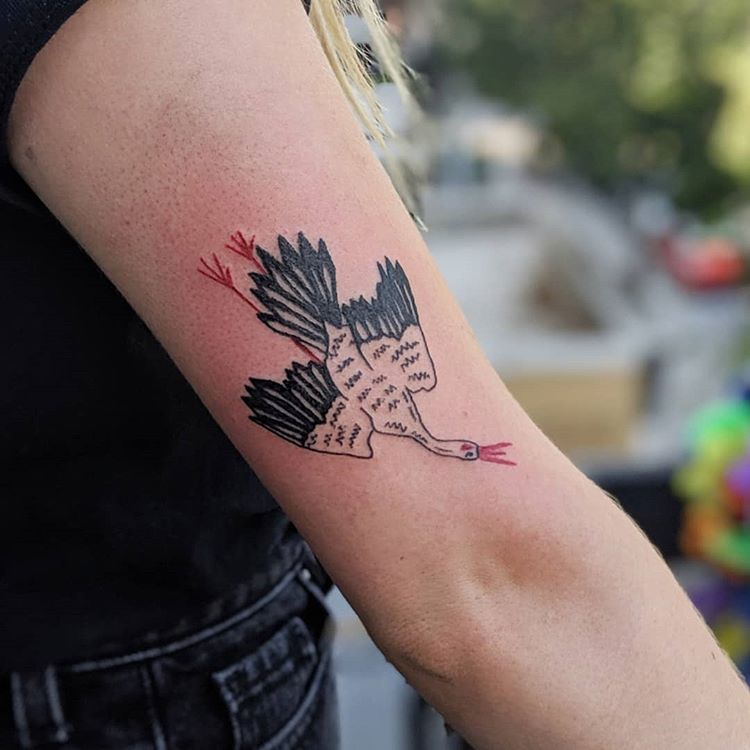 #12. This tattoo contains a thorny flower along with a bird whose claws are placed in such a way that it is ready to snatch the flowers. The body of the bird is drawn with an exceptional shade of yellow. 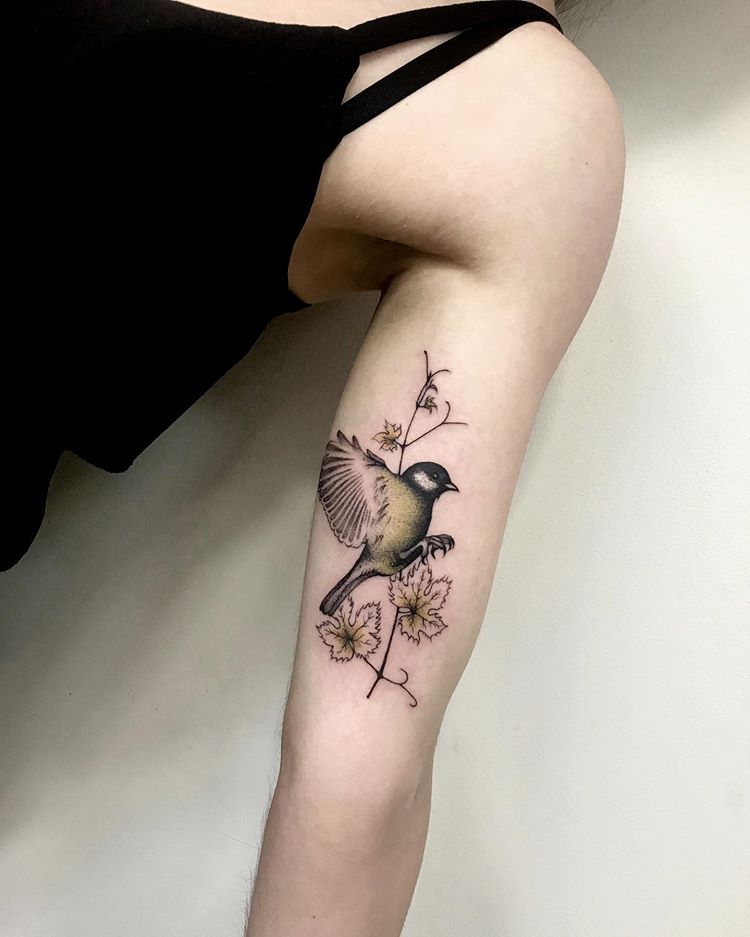 #13. This amazing tattoo has a rhododendron at the base. Petals of the rhododendron are seen flying along with six birds making a journey in the upward direction. The birds are painted in solid black. The petals are drawn with lines of black. 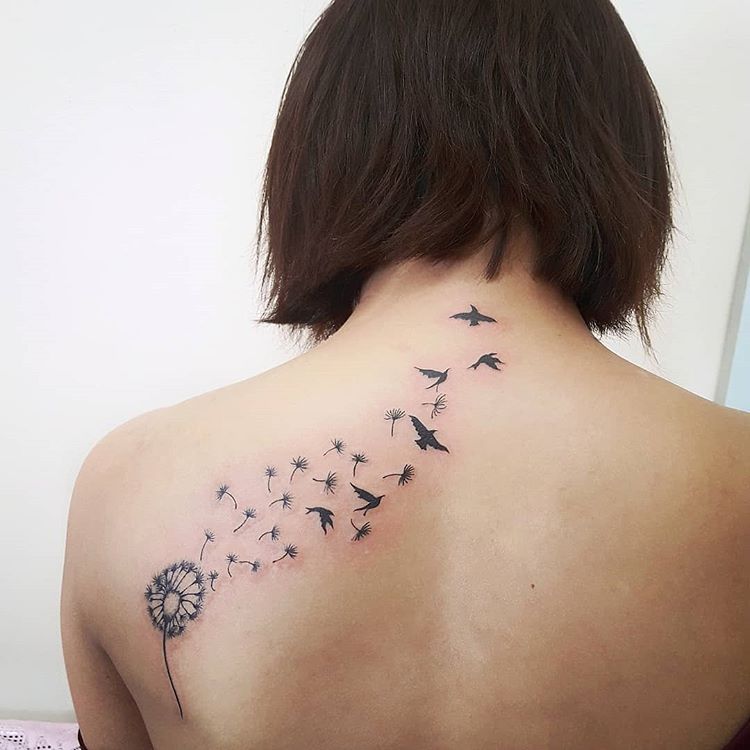 #14. This is a multi-coloured tattoo having a combination of red, peacock blue and black. The outline is drawn with black colour and the body of the bird with a shade of dark ocean blue. The bird is pointing upward as if ready for a flight. 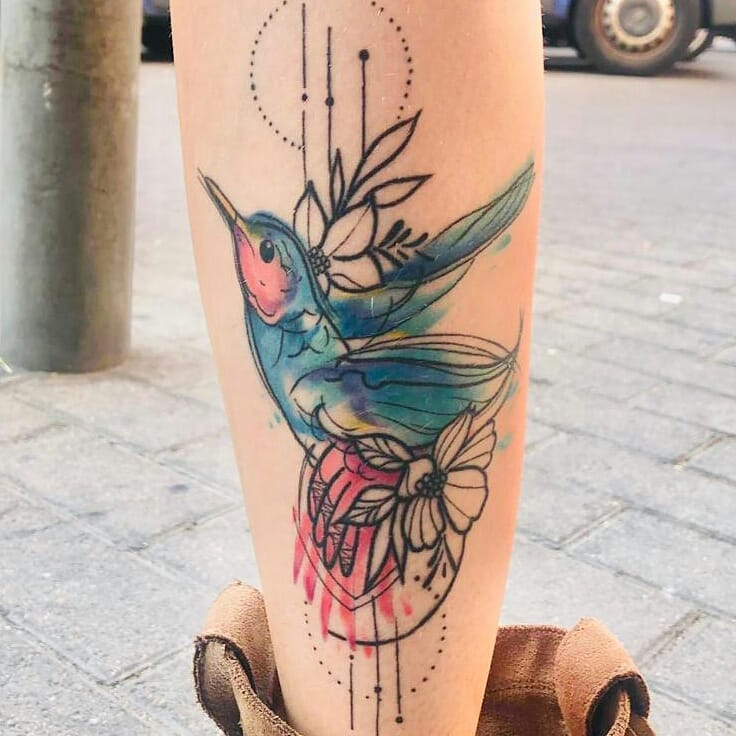 15. This is a bird sitting on the top of a semi-visible skull. Out of the skull sprout outs flowers and twigs. The image is drawn in such a way as if a skull is being placed over a flower. The remaining of the flower peeps out from one side. The bird has a big eye. The work is carried out primarily with black colour. At places, a pinch of grey colour is used to give it an extra texture. 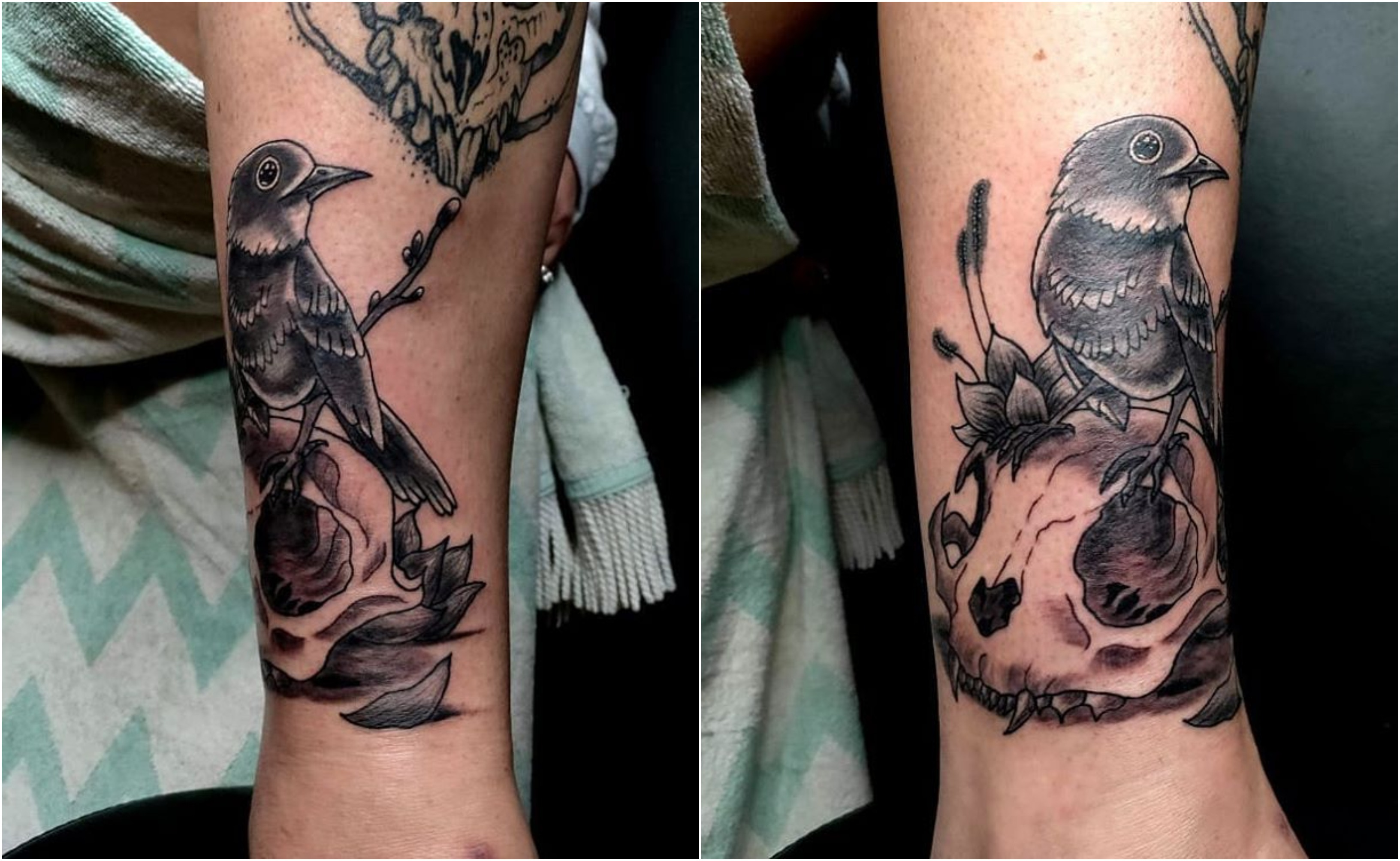