Home Tattoos Chest Tattoos For Men- Bare It All Out or Stir Some Imagination! 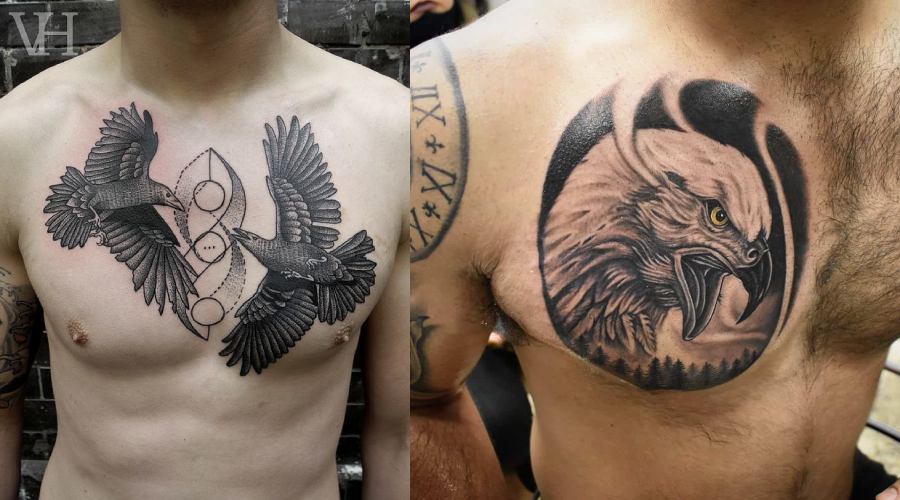 Chest tattoos have to be the most exclusive of all the unique tattoos for guys. We realize how tough it may be for guys to show off their breast tattoos. This will take a lot of courage, but we recommend letting it all hang out and letting go of your shirt. Wearing a pair of denims with branded underwear, a belt, and a fashionable boy cap can make you seem extremely hot.

Because they are clearly seen and perceived by others, chest tattoos are frequently big, complex, and have considerable value for the bearer. Some individuals find it simple to come up with chest tattoo ideas since they can obtain almost whatever they want in this region, while others find it a little more difficult because they want the perfect chest tattoo. We’ll go through 15 fantastic chest tattoo ideas and why they could be perfect for you on this post.

If you are going to go for a dragon tattoo then let make sure to engage a properly oriental vibe with an artist that knows their Japanese colors and strokes. This bold black and fierily red tattoo is one of the rare opportunities that allow men to show off color and not risk looking feminine. Dragons symbolize power, strength, good luck, protection, wisdom and a range of good vibes. 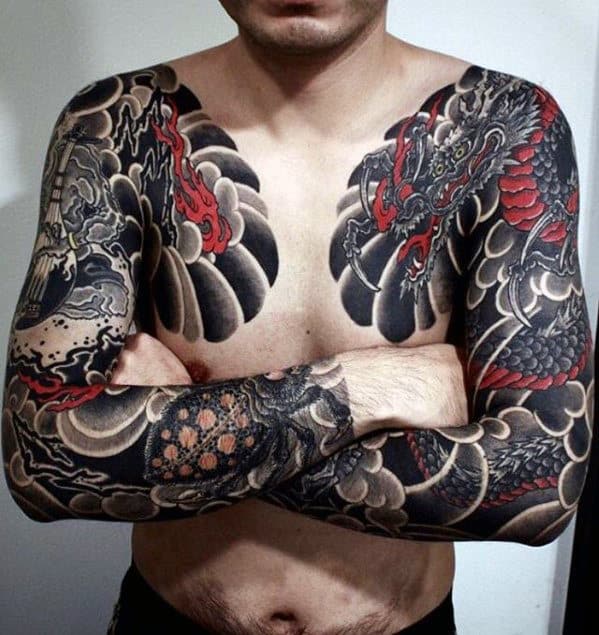 If on the other hand you think a dragon tattoo is to die for but prefer to stick to the default ink color for male tattoos then you are welcome for this stunning monster standoff tattoo. Mean monsters contrast with a calm and collected composure and tell of a fierce individual and the battle within. If you think you have a chaotic inner self and have always wanted a way to vent this, then you have the perfect excuse to take on this monstrous challenge of a tattoo impacting a very wide area of your upper body. 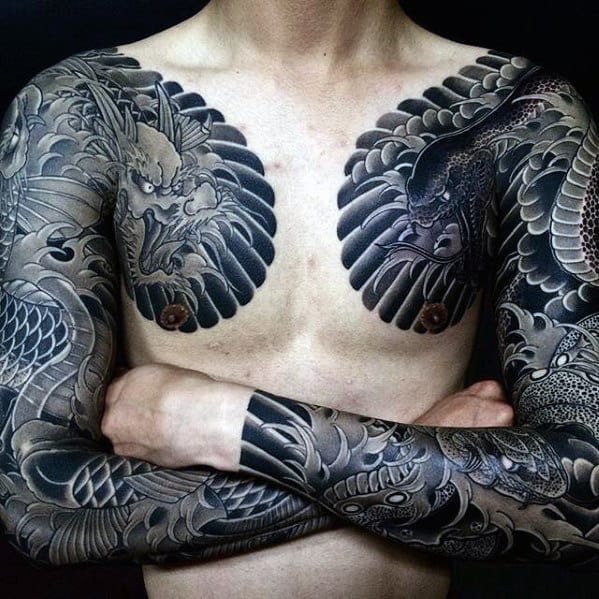 Cameras, Roses and clocks are not a usual combination for tattoos but then we are not only about the usual. On the contrary we would like to get you a tattoo that says who you are without being a cliché. There are only a handful of these out there and there could easily be as many meanings as the owners and willing interpreters. This could easily mean travel, love and life taking the most prominent meanings of each of the items. 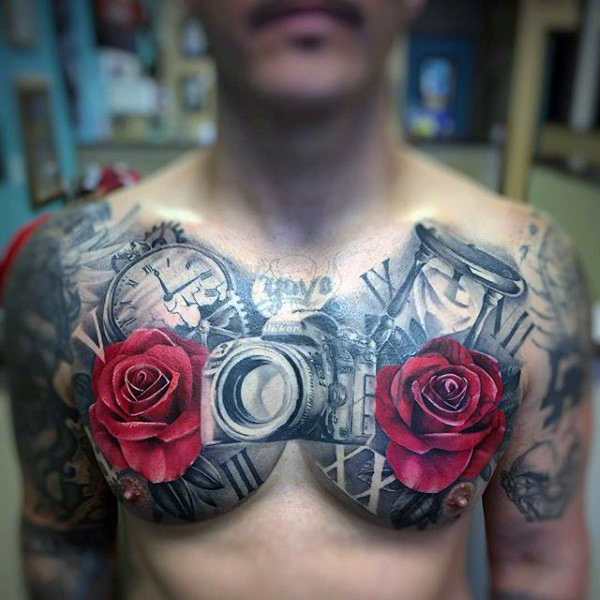 We all wants wings to fly when we are young and reach the land of our dreams. Nothing says it more elaborately than this impactful chest wide tattoo with angelic wings on each breast. Why not throw in a giant diamond with divine lights surrounding it just to top up on the angelic theme. On each arm we have an assortment of images including skulls and clocks and little doves flank each shoulder. It is an intense wide area tattoo with easy meaning. 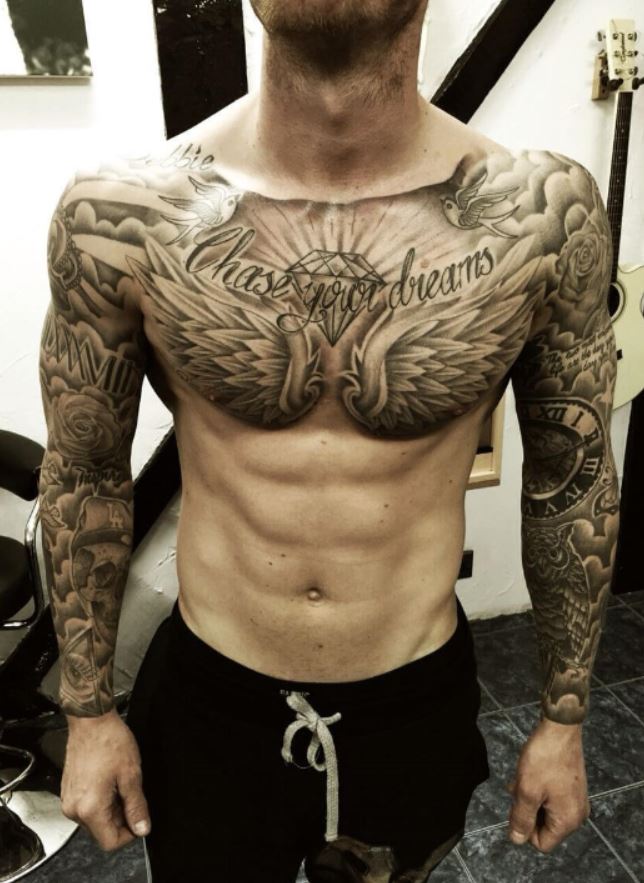 If you love the 1993 American Drama Film, My crazy Life or MiLoca Vida in Spanish then maybe its reason enough to have this tattoo other than of course that your own life is crazy. The tattoo has affiliations with violent gangs and barely makes the cut for mainstream tattoos except for its part in the film. It is rumored that some of the cast were actual gang members of Echo Park. 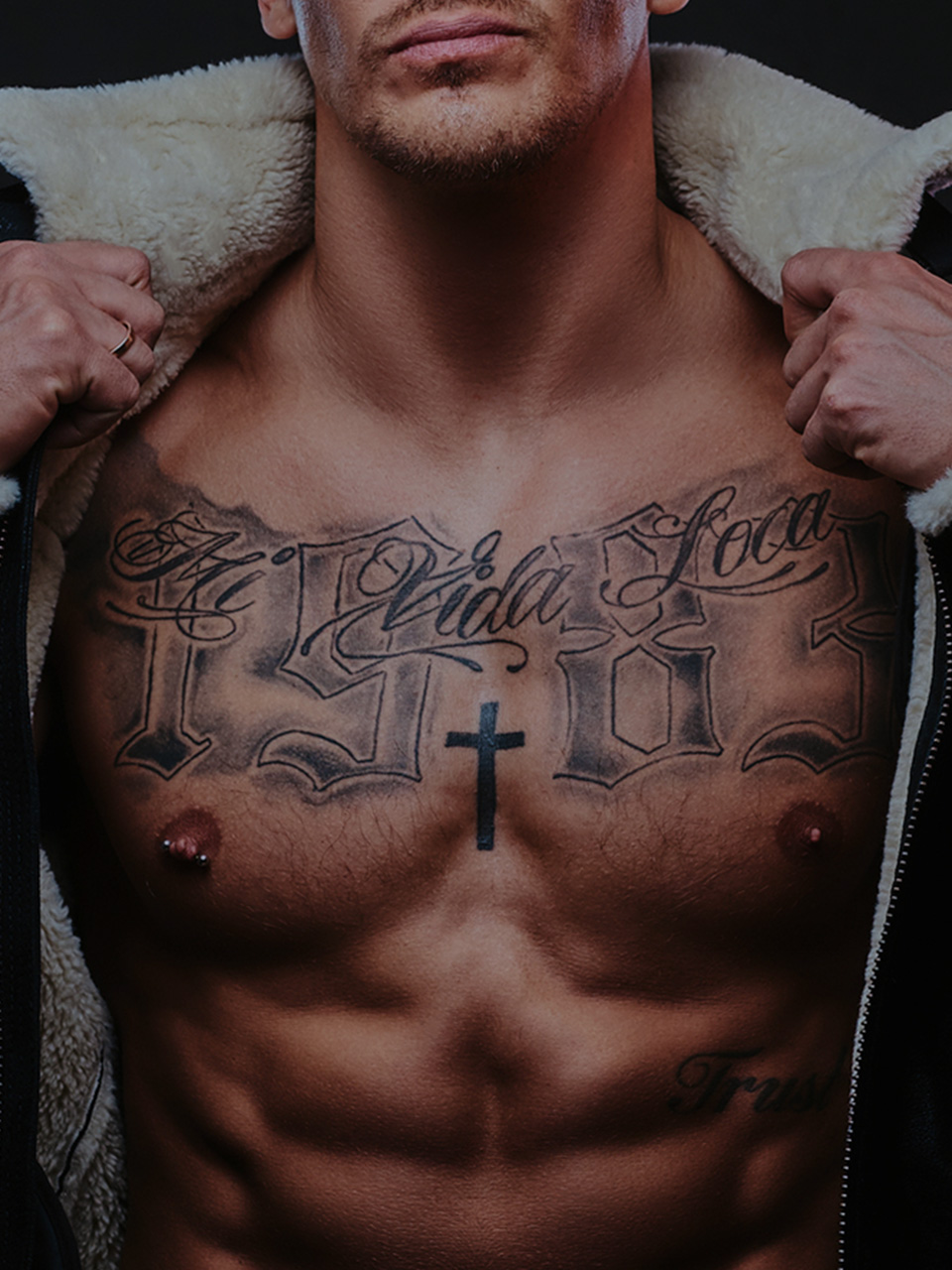 Nothing compares to going full out bear with a chest and arm tattoo. This is one of the sexiest looks to have when choosing a large area tattoo. This man has a wide range of seemingly unrelated scenes from his life skillfully etched on his skin. These must be unique to him and only hard core ink enthusiasts will have the content to pull this off. Further you will need to discuss and simulate with your artist where everything will be in this seemingly endless chaos. 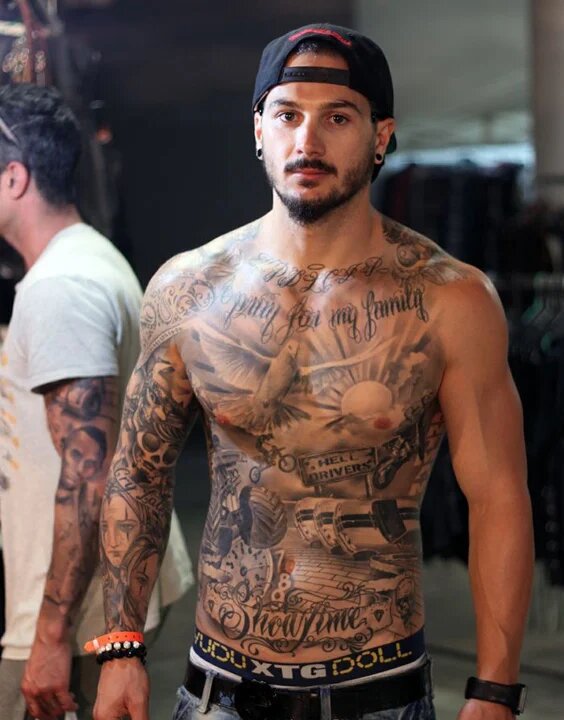 Who said beautiful mandalas are a reserve for women tattoos? Here is living proof that a nice geometric mandala design can look uniquely sexy on a male chest when done well. It not only enhances his masculinity but also complements his warrior looks resembling a shield of armor. if you are not for animal or scenes then you can choose to go with a mandala and still get it very right as in this picture. 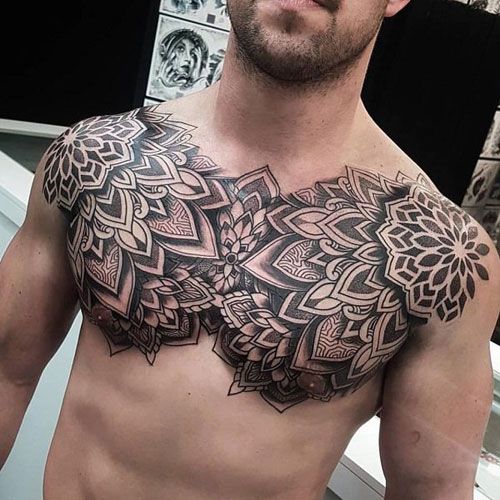 Even though we named this tattoo “black” just to make it easier to find, it has nothing to do with black men only. Although you have to appreciate that it looks sexy as heck on this tribal creature of African origin. The theme can vary depending on your taste but for this piece it seems to be a god or other divine figure and a dragon showcasing the contrast between the monster and holiness fighting for attention within the man. 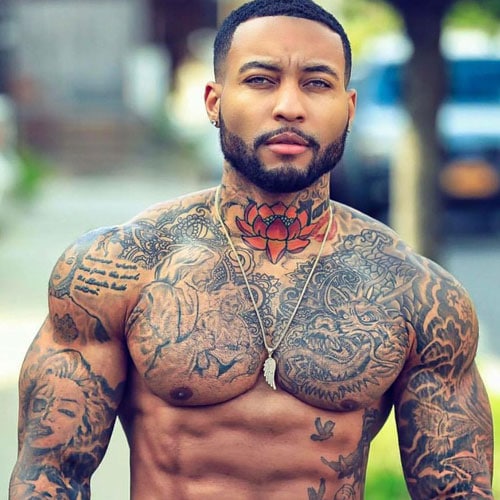 This absurd monster is one that is surprisingly intriguing for a chest tattoo. It is hard to discern its meaning but it would appear that the artist was going with a mysterious theme adding swords for horns and things like that. It has a flowery appearance despite being a monster and its eyes appear to be shut so one feels safe. Careful not to wake the beast! 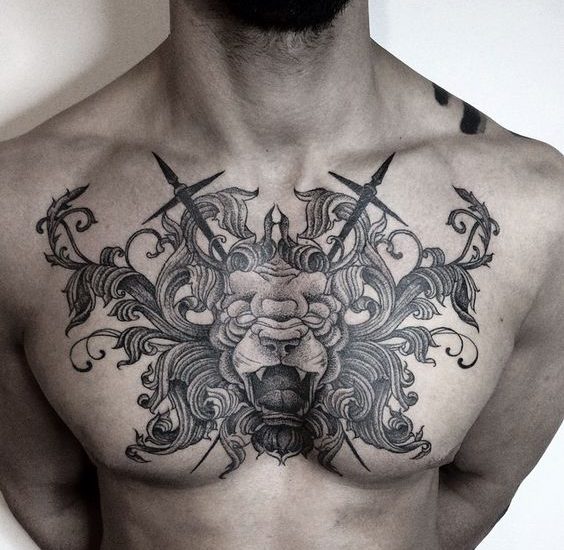 10. Day of the dead chest tattoos

Many people use skulls to depict the day of the dead in tattoos but this is a less eerie alternative to paying your respects to the fallen. It is said to be the path of every living soul and the least we can do is celebrate those that still walk among us. The next October is always around the corner but even before then, you can maintain your spooky while still bearing a meaningful tattoo for meditation and prayer remembering the dead. A clock reminds of passage of human life. 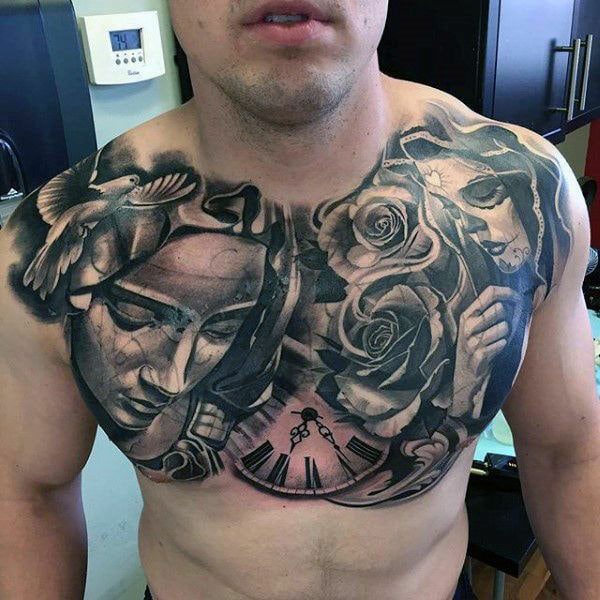 This bearded man is masculine enough to take on a playful and girly vibe with water color tattoos without appearing to be feminine. To focus on the chest tattoo, it is void of color except for the eagle landing on antlers of this strange sketched reindeer. The animal is weeping from one eye and has arrows penetrating its side. Flowers, trees, and other natural features strengthen this concept and help others understand the significance of the deer tattoo. 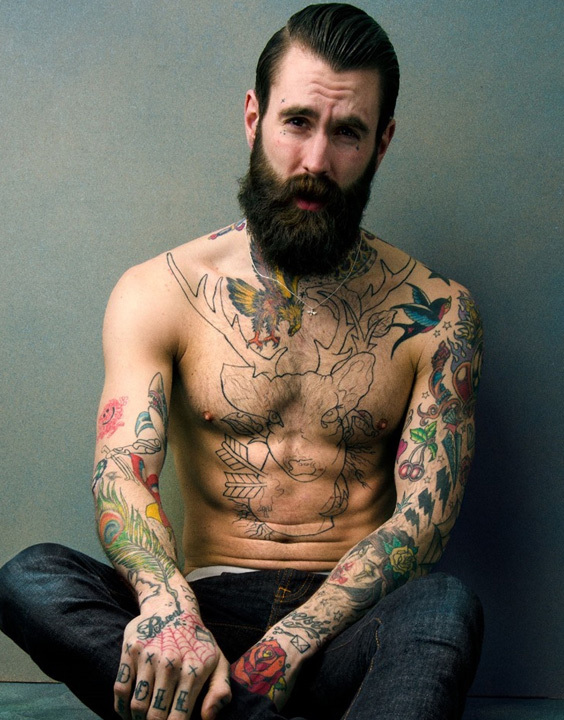 Deer species may be found all throughout the world, frequently acting as prey for people but also as a link between mankind and its lost connection to nature. If you are a nature lover looking for a single image to display to the world, this deer tattoo meaning is for you.A deer skull is frequently used to create a more gloomy design, emphasizing death and mortality. The deer is a good fit for this topic, since it reminds us of the natural processes of death in nature and their final inevitability. 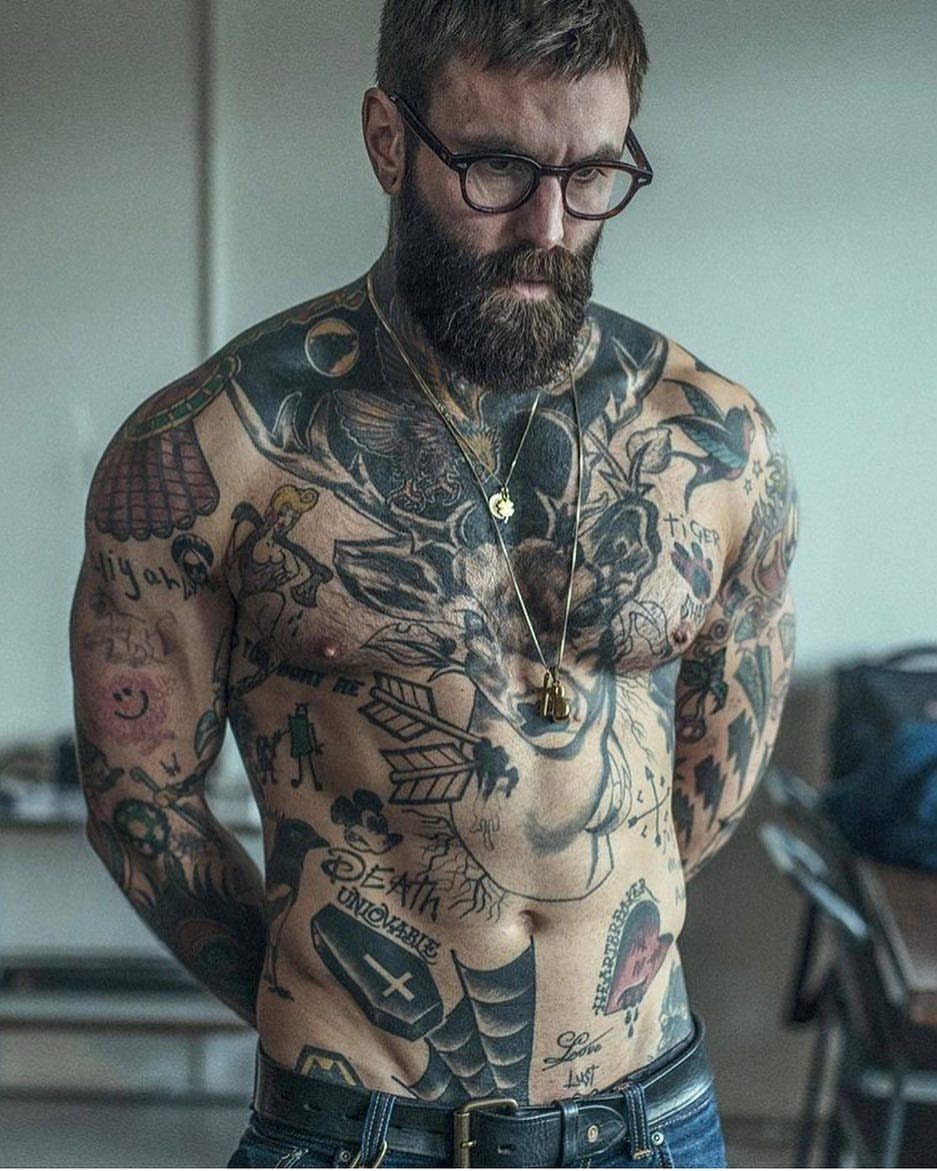 This piece is strange in that there is an angel who appears to be carrying a weighing scale on the one hand and some strange object on the other. The wings are the first sign of trouble because they resemble more of a bat wings than angelic wings and further, the face is marked with a cross and there are horns on his head. The sketchy theme is adorable and the lack of symmetry rhymes with the weighing scale idea of judgement. 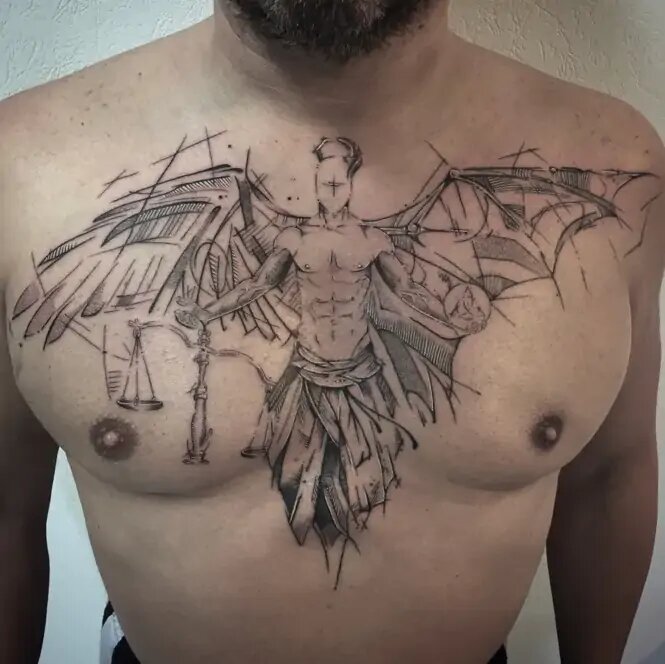 If you like to seize the day and you believe in living by the sword then this guns and one love tattoo will be a perfect match for you. It has an antique theme to it and also presents opportunities to add some quotes every now and then. Guns and roses are an interesting combination for a male chest tattoo. 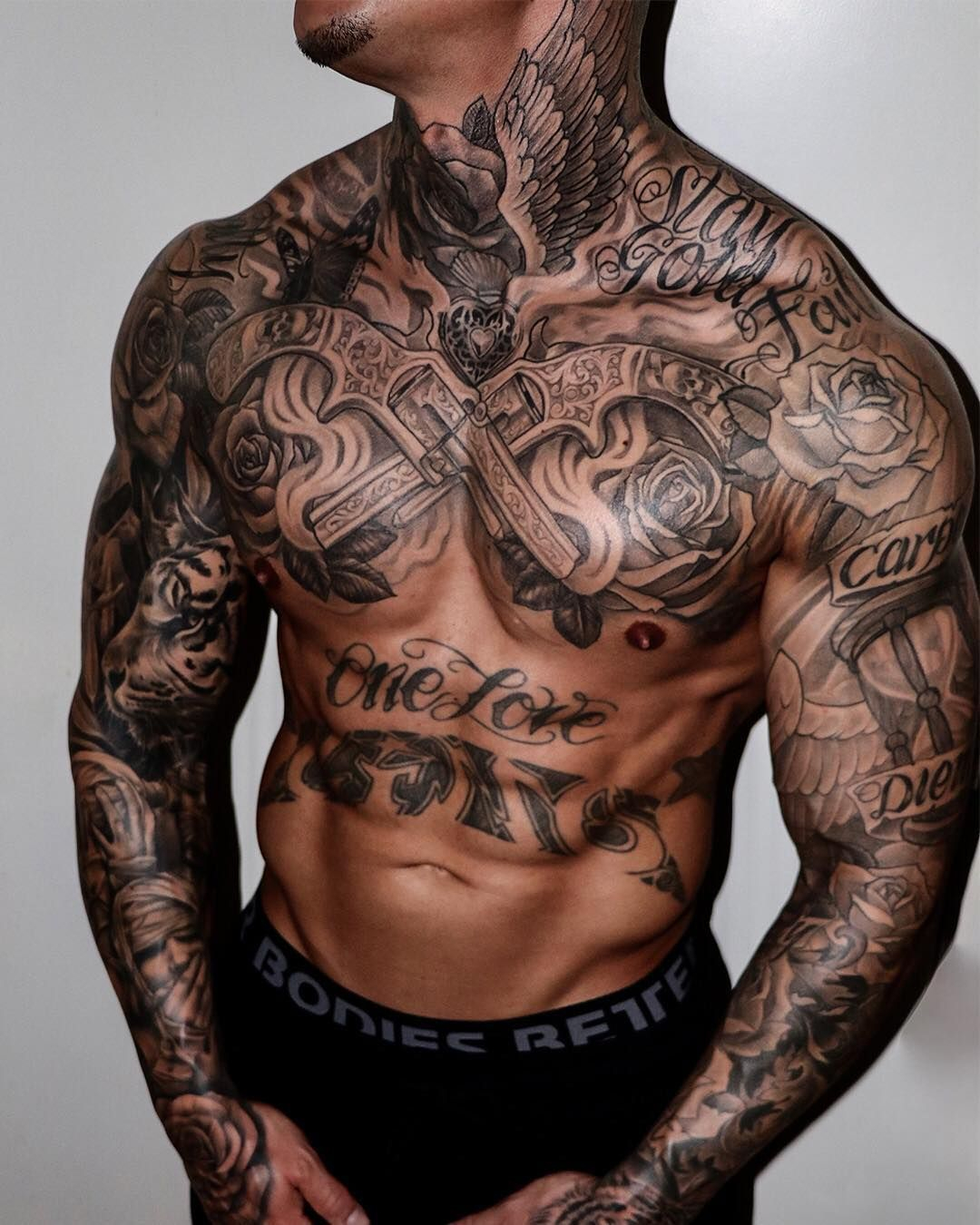 To produce dramatic and strong graphics, the tribal art style employs blank ink, curving lines, and patterns. These patterns might be abstract, yet they are frequently influenced by nature. Animals, such as elephants, are an excellent choice for a tribal-style tattoo since they both symbolize humanity’s relationship to the natural world. 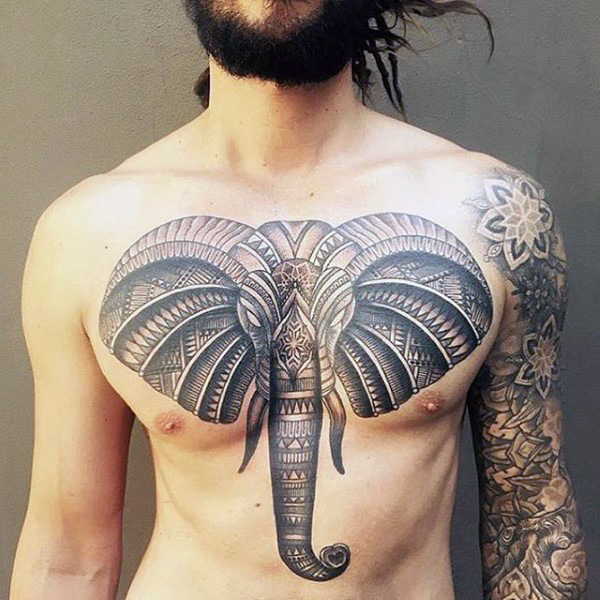 The chest, more than any other part of the body, necessitates a lengthy tattooing session since the artist must verify that each line is in harmony with the client’s physique. This implies that you should take your time to ensure that the breast tattoo concept you’re considering is appropriate for your unique chest region. After there, it’s just a question of figuring out how to make it work with your chest’s various curves and lines. 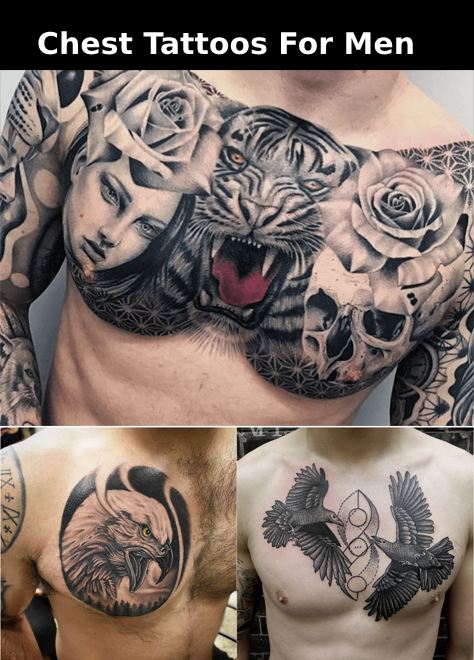